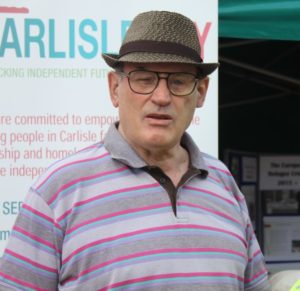 The City of Sanctuary committee’s beloved friend and co-chair, Carlisle Refugee Action Group (CRAG) volunteer, Laughter Yoga leader and occasional Father Christmas, Keith Adams, passed away on Thursday 18th November after a short illness.
Keith took over the Carlisle City of Sanctuary co-chair role in May and he was an active member of our group, suggesting ways forward and new ways of reaching out to and engaging members, fundraising and supporting his co-chair, Mina, in her role. He had been a regular key member of the CRAG drop-ins since the early days in 2017 and we had many highlights over the years including the ice breaker laughter sessions he ran with the Syrian families, Talkin Tarn Laughter Walks and his role as Father Christmas in 2019! He was such a good friend to many including the Carlisle refugees from Syria and other parts of the Middle East who have been paying tribute to him on social media.
We are feeling so sad and there is no doubt whatsoever that Keith will be missed by his many friends across the UK and, indeed other parts of the world where he had lived and travelled during his 80 great years.
Rest in Peace dear Keith and keep laughing!
More information and tribute to Keith with a link to donate to Carlisle City of Sanctuary here